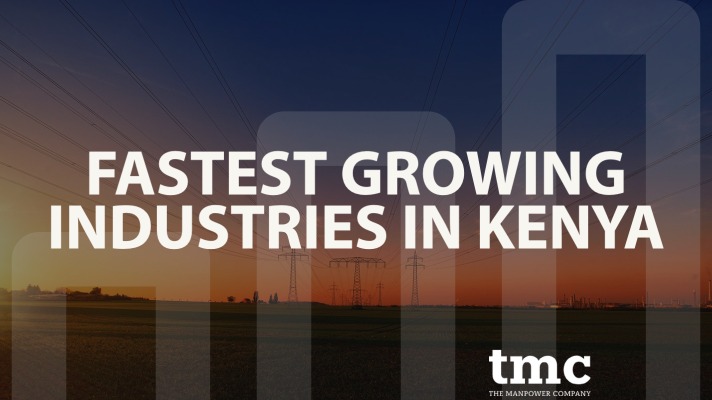 Kenya recently reclaimed its title as the largest economy in Eastern and Central Africa; a position previously held by Ethiopia. The government has made various political, structural and economic reforms that have greatly contributed to Kenya’s economic growth, social development and political gains over the past decade. According to a report by the World Bank, Kenya’s economic growth has averaged at 5.7%, placing Kenya as one of the fastest growing economies in Sub-Saharan Africa. In this article, we’ll look at some of the fastest growing industries in Kenya today.

Kenya is nicknamed the “Silicon Savannah” because it is regarded as the second-best innovation hub in Sub-Saharan Africa. Technological advances are playing a key role in ushering in a new automated age. Kenya has seen vast developments in the fields of robotics, artificial intelligence, and machine learning.

Technological developments have changed the way in which Kenya interacts with the global economy. Kenya is now able to produce a higher quality of  products at an expansive rate, which has greatly boosted its trading prospects. Advancement in Information and Communications Technology has led to significant economic growth which in turn expanded the creation of job opportunities.

The tourism industry is one of the fastest growing industries in Kenya. According to the Ministry of Tourism and Wildlife, Kenya is currently the third largest tourism economy in Sub-Saharan Africa after South Africa and Nigeria. In 2019, the industry contributed a total of Ksh163.6 billion to Kenya’s GDP.  The tourism industry has also created an estimated 1.1 million jobs for the Kenyan people which in turn leads to economic growth as the government earns revenue through taxes. More recently, Najib Balala, Kenya’s Minister for tourism named the famed supermodel Naomi Campbell as Kenya’s new tourism advisor. This move will definitely boost Kenya’s tourism sector and increase international visits to Kenya.

The past two decades have seen an exponential increase in the Kenyan real estate market. This growth has been driven by various infrastructural developments such as improved roads and the upgrading of key airports as well as improved utility connections. Rapid urbanisation and a steady population growth have also contributed to the booming real estate sector. The influx of people moving in to the cities from rural areas has led to the building and selling of various land titles and properties. The fact that land appreciates in value over time has made the real estate business very lucrative with more and more people investing in land and property.

The development of various infrastructure and the steady growth of Kenya’s economy has also led to the rapid development of the transport sector. According to Kenya’s transport sector profile, the sector grew by 8.8% in 2016 compared to 7.1% in 2015. Of course Kenya still has some way to go in the transport sector however the growth and development is on an upward slope and is only getting better. In a bid to stay in line with its Vision 2 030 goals, Kenya’s development plans include significant improvements to roads, railways, seaports and airports in order to compete in the global market. The construction of the SGR has opened up Kenya’s interior and has vastly increased and improved trading activities within the country.