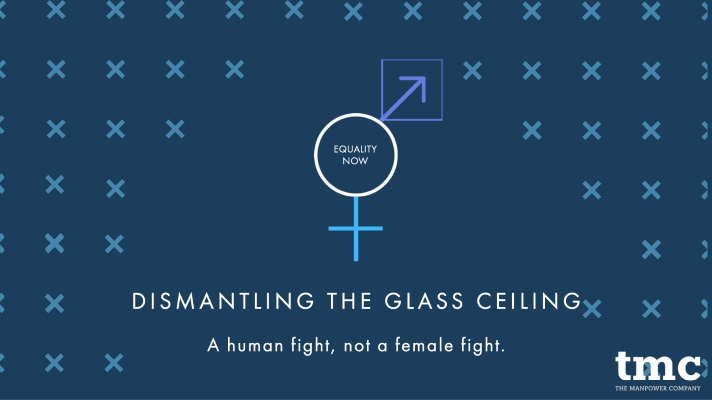 The concept of the ‘Glass Ceiling’ refers to the socially constructed barrier that aims at preventing women and people from minority groups from advancing in their professional lives. The term was first coined in the 1980s when women pushed for equal pay and opportunity in the work place in a bid to fight gender based discrimination. Although we have come a relatively long way in the pursuit of gender equality, in the workplace there’s still need for improvement. The glass ceiling has various negative effects such as gender role stereotyping where women are not considered for leadership positions due to overly traditional ideas on strength and ability. Further, the glass ceiling often leads to sexual harassment, gender bias and serious psychological conditions for its victims . In this article we’ll look at some of the ways you can begin dismantling the glass ceiling in your workplace.

Those in charge of hiring as well as key decision makers must make an effort to ensure that they hire employees based on their talent and merit rather than their own personal bias. This means that they must level the playing field and broaden their viewpoints in order to make accurate hiring decisions. In this way, the company also excels as the best employees are using their skills to ensure success.

Ensure that all employees are treated equally and that all rules and regulations are applied equally. The Constitution of Kenya prohibits discrimination either directly or indirectly against any person on the basis of race, sex, pregnancy, marital status, health status, ethnic or social origin, colour, age, disability, religion, conscience, belief, culture, dress, language or birth. There should be no room for bigotry and discrimination in the workplace as this would be in direct contravention of the Constitution which is an offence.

Working in a diverse workplace also means that there are members from different generations working together. Generational gaps sometimes prove difficult when navigating sensitive issues like gender discrimination. Provide room for your employees to discuss topics such as consent, sexual discrimination and harassment as well as other gender related topics. Creating awareness about these issues is the best way to involve everyone in the discussion and to find workable solutions for your company. This can also help reduce gender based discrimination and to promote collaboration and equity among employees.

Many times victims of gender based violence and discrimination in the workplace rarely come forward and when they do, they face increased harassment and in some instances lose their jobs. Employers and HR managers must investigate every report received with critical consideration and awareness on how these issues typically manifest and escalate. It is important to handle these issues tactfully and with the utmost professionalism in order to ensure that victims feel safe to come forward. Hold those responsible accountable and weed out predators and disruptive employees from the company.

As an employee, sometimes you can only do so much. Should you find yourself in a situation where your voice is not being heard and the company refuses to take action; take the reins and find career opportunities elsewhere. Find job opportunities that align with your values and career goals and move on. Seek help and support from like-minded individuals and network in order to support each other’s professional goals.