3 MUST KNOW CHANGES TO COMPANY LAW IN KENYA 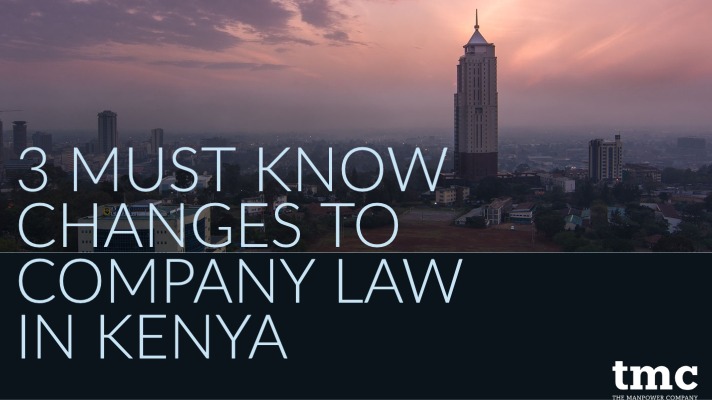 Like most institutions in this country and the world over, there are laws set up by the government to ensure legality as well as the promotion and protection of individuals rights in these institutions. These laws also serve to ensure the efficient functioning of these institutions. There are various laws that govern how business is conducted in this country as well as how companies are to conduct their dealings. In this article we’ll look at some of the new laws and amendments to these laws.

This Act will be responsible for matters relating to business registration. This body will also take over the existing company law functions of the State Law office. The Business Registration Service Act, 2015 will become operational on a date to be set by the Cabinet Secretary by notice in the Kenya Gazette.

The Companies Act of 2015 is one of the laws intended to streamline the manner in which business is conducted in Kenya. The intention behind this is that the new provisions will be more flexible, in line with modern business practices and will in turn lead to growth and innovation in various commercial transactions in Kenya. Among the many significant changes, the Act now has provisions that allow companies to have a single shareholder as well as provisions that require a company to have at least one natural director except for in cases where the company’s sole director is a corporation.

Previously, financial assistance was prohibited except in a limited number of cases. This is no longer the case as companies are now able to buy back their own shares in order to create treasury shares which may then be re-issued.

To begin with, insolvency occurs when a company is unable to pay its debts. The Insolvency Act of 2015 contains laws relating to matters of insolvency for both individuals and companies which were previously contained in the Bankruptcy Act. The Insolvency Act provides debtors with an alternative to bankruptcy. It creates the legal framework that enables companies to be put into administration which is an alternative to liquidation under the supervision of an insolvency lawyer.

In Kenya, our laws are constantly changing and various amendments are done to ensure that the laws serve the Kenyan people accordingly. It is important to keep up-to-date with these changes.

Kindly visit http://kenyalaw.org/kl/ to find out more about our laws.