ROLES AND DUTIES OF COMPANY DIRECTORS 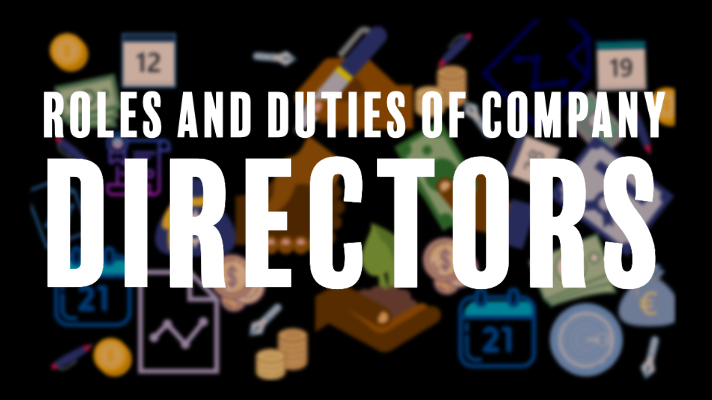 All registered companies must have directors, and normally there must be at least two, although one suffices for a private company. The position of directors is similar to that of trustees. This means that they do not have legal title in trust property instead they are bound to invest for the benefit of the company e.g. in their fiduciary relationship to the company, in issuing shares, and approving transfer of shares. They are, however, trustees for the company, and not for the individual shareholders, nor for third parties who have made contracts with the company.

WHAT CAN COMPANY DIRECTORS DO?

The powers of directors may be increased or in certain circumstances restricted by the shareholders. If the directors act beyond their powers the shareholders may vote to have them removed from the position. A director is in a fiduciary position to the company in his capacity as an agent, and he cannot, therefore, place himself in a position where his own interests conflict with his duties. Directors must on no account make any secret profits. Any such benefit is regarded as a bribe, and the directors are accountable to the company for such.

The directors are liable for negligence or breach of trust in relation to the company’s affairs. They will also be held liable in cases of fraud or gross negligence in respect to the company or third persons.

During the course of a winding-up (process by which a company’s assets are collected and sold in order to pay its debts), the Companies Act provides that a director who has misapplied or retained or become liable or accountable for any money or property of the company, or has been guilty of any misfeasance or breach of trust in relation to the company, may be compelled to repay or restore the money or property or to pay such sum to the company as the court thinks fit.

Directors are personally responsible for fraud; although, where the company has taken advantage of and benefited from a director’s fraudulent misrepresentations, the company may be held bound as well as the directors.

Managing a company is no easy feat and so it helps to know what exactly a managerial/ directorship position entails. Hopefully this article provides some useful insight on what the role of a company’s director entails.